the journal
PEOPLE OF THE WILDERNESS: VINCENT MATHEBULA, ENTREPRENEUR IN SOUTH AFRICAN TOURISM
by 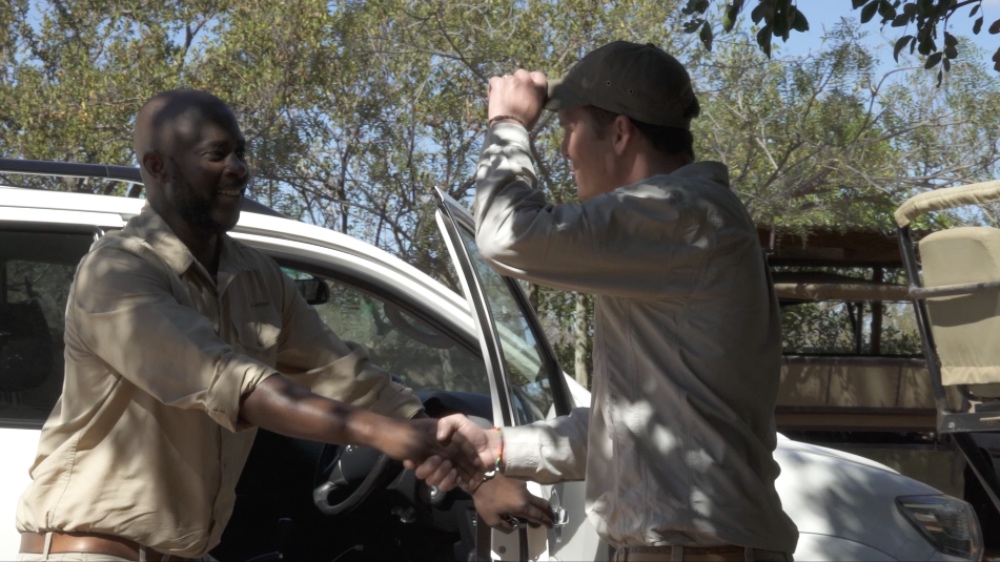 Brett met Vincent Mathebula many years ago while guiding at Singita Kruger National Park. At that stage, Vince was a part-time bar tender, which was a job he had taken as an opportunity to gain access into the tourism industry. Vince’s brother gave him the good news that this position had opened up and Vince took it in both hands, hopeful that he could learn and grow with his foot in the door. Today, Vincent Mathebula is a successful entrepreneur with his own business in tourism, and it is due to his hard work and determination to persevere in the industry that was waiting on his doorstep as he was growing up in Acornhoek. His message is one that highlights the importance of teaching youths in communities surrounding the Kruger Park that there are opportunities to work in tourism – a booming South African industry.

We listened as Brett sat down with Vince, whose interest and passion to learn about wildlife and safari tourism got him to where he is. Vince is the latest instalment in our People of the Wilderness series.

Prior to his lucky break at Singita, Vince had struggled to find work as a qualified traffic safety officer, and felt despondent about working in a government position which was work he says most of the people in his community were hoping for. Despite finishing high school and taking on a year-long course to study traffic safety management, he could not find work and became desperate to start generating an income. When he asked his brother to ask about part-time service work in the Kruger, it didn’t sound promising, but this lucky break is what set Vincent on the inspiring path success in tourism.

In Vince’s own words:

While I was working at Singita I developed so much interest in tourism that I decided to register for a tour guiding assessment. The day I passed the assessment I felt proud of myself, and immediately developed confidence that the qualification would make a big difference in my life.

In 2012, Vincent registered Mathendlo Tours and Safaris with hope that he could grow its name and develop a reputation as a day tour and transfer company for the millions of tourists that visit the Kruger National Park and private reserves every year. His home in Acornhoek was ideally located for accessibility, and although it was early days, Vince remained determined to build the business.

I went to all government departments and funding agencies to research how to get financial help, and I realised that I needed experience. It was then that I applied for freelance guiding jobs in Hoedspruit. Luckily I was promised a Job at Schoeman Tours and Safaris and I freelanced there for four years as a guide.

Vince had qualified as a guide and spent four years gaining experience and expertise. Having accessed the industry through the right channels and worked hard to build a name for himself, it was time for Vince to put the pieces together that would take Mathendlo Tours and Safaris to the next level.

The biggest challenge was getting a car, which would qualify me to do the job as a tour guide, but applications to purchase were rejected because of a low salary and no payslip. My wife rescued me in 2016, and in March I applied for a Toyota Avanza. Luckily I was promised a as a freelance guide and found work over four years.

Getting financed for a vehicle in his wife’s name meant that Vince could move on to the next step, and applied for passenger liability insurance as well as the permits he needed to conduct his business.

I gained lots of energy and excitement for my company, and it every went well. I submitted my details to to some of my colleagues who have companies and lodges, and I got many calls for Mathendlo Tours and Safaris. I soon became busy, and since September 2016 until now, the business is coming along ok.

When we invited Vince to come and tell us his story in June this year, he arrived in a Toyota Fortuner and he says the next phase is to buy a single cab that can be converted to a game viewer with Kruger National Park specifications so that he can conduct safaris in his own vehicle. We are inspired by Vince and we know that when our clients are in his hands, they are getting excellent service from a man who has made incredible success as an entrepreneur in South African tourism. Thank you for sharing your story, Vince! Watch Vince talk to Brett about the opportunities a career in tourism can present, below.