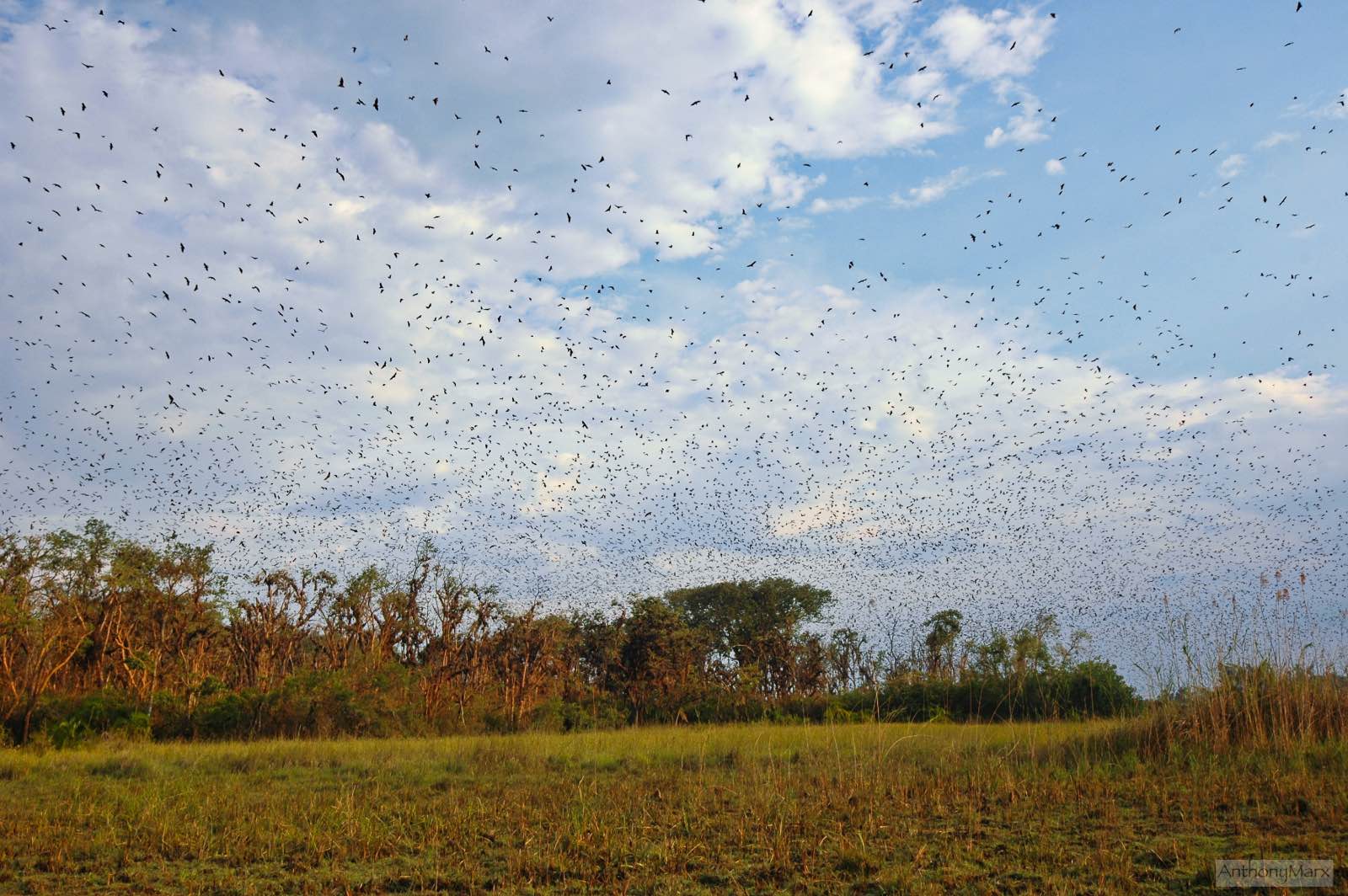 Years ago, our safari expert, Rosey Marx, and her husband, Anthony, travelled to Kasanka National Park in Zambia to see the famous and phenomenal bat migration. As natural adventurers, these two have traversed much of the African continent together, but this event – the world’s largest mammal migration – is one that stands out. A sensory overload, and something you really should see for yourself. Here, Rosey gives her account of the trip to see the bat migration of Kasanka, illustrated by images taken by Anthony. You can contact Rosey directly on res@bretthorley.com for any information regarding this bucket-list trip!

The noise is phenomenal, and as we walk into the mushitu, the forest on the banks of the Musola River, the sound gets louder and is like nothing we’ve ever heard before.  The sight is unbelievable, huge fruit bats – the size of a small dog – hanging from the branches of the trees, with a wingspan just under a metre.  This isn’t thousands of bats hanging in the trees, this is millions and the noise is deafening and constant. Their dark shapes cling to the trees like dead vegetation.

Then, hundreds of bats take off. Our guide, Kenneth, suggests they are perhaps disturbed by the smoke of nearby bushfires.  A short while later they settle again, landing against the tree trunks and crawling upwards using their short legs and long thumbnail on their wings.  Their yellow backs are highlighted in the sunlight.  Huge branches lie on the ground, broken from the weight of the bats.

They are not easy to count, although scientists estimate this colony numbers 5 to 15 million bats when the migration peaks in late November, creating the world’s largest population of fruit bats.  The bats start fluttering in from their equatorial hangout in the neighbouring DRC by mid-October, when the rains create a feast of abundant fruit on the waterberry trees.  By Christmas the bats have returned to the Congo, the border only 30km from Kasanka National Park.  Kenneth has been in the park for 13 years and says the bats return to the same group of trees every year.  He tells us the bats take flight at 18:15 to go grazing for the night, and we arrange to meet at 18:00.

Huge black thunderclouds loom over us, the vegetation contrasts a bright green against the dark purple sky.  At 18:11 a few bats take off.  Sure enough, within minutes we have a lift-off. Hundreds, then thousands, and finally millions of bats are in the air above us.  The noise of the bats, the sound of their wings, and the sight above is spectacular.  For 25 minutes bats are taking off from the trees and flying over us, until the sky above is filled with bats, their metre-long wingspan a sight to behold.  Within 360 degrees above us, from horizon to horizon are bats.  At last the branches of the trees start thinning until there are no bats left. It’s almost dark.  We’ve witnessed something that other people will only read about, a unique phenomenon and one of Africa’s great wildlife spectacles.

For the rest of the year, Kasanka is a quiet park, 500km north of Lusaka, with one of the most accessible populations of the rare sitatunga – a shy swamp-dwelling antelope which is usually difficult to spot.  The Fibwe Hide in a khaya nyasica tree, about 20 metres off the ground overlooks the papyrus swamps, and is the premier viewing platform for sitatunga in Africa.  Our climb is immediately rewarded with a sighting of a female and then male sitatunga. Puku are commonly found, and we see a lamb suckling its mother.  Sable and roan antelope, troops of blue monkeys and yellow baboons, can be seen in the park.

It’s the fruit bats that make Kasanka the truly unique destination that it is, and this is definitely a bucket-list experience.